In 1999 South Africa suffered a terrible blow to its fledgling democracy. In a country still reeling from the socio-economic damage inflicted by over 300 years of legalized racism, an arms deal was struck that would damage it for years to come. Andrew Feinstein was an MP at the time, and was forced out of government when he protested against the huge levels of corruption he was witnessing.
END_OF_DOCUMENT_TOKEN_TO_BE_REPLACED

People come to Bristol from all over the world for many different reasons. Most reading this paper have come to Bristol in the hope of getting a good education. Some arrive here in the hope of finding a relaxed yet vibrant city in which to raise a family. Others arrive in the hope of starting new lives entirely, escaping from war or oppression elsewhere. There are many more reasons etched into the city’s past: slavery and the collapse of an empire, to name just two.

Bristol today is a product of that past, and a continuous project in attempting to come to terms with it. In 2007 the city marked the bicentenary of the Abolition of the Slave Trade Act with a series of exhibitions, educational projects and community events. And looking to the future, rather than the past, Bristol was last year named a City of Sanctuary: a place proud to offer refuge for those who are no longer safe in their own country.

END_OF_DOCUMENT_TOKEN_TO_BE_REPLACED

Telepathic Heights - the party is now officially over

“Did you hear that? This guy thinks that some people have too many rights!” A weary riot officer was experiencing the full force of the civilian right to protest. His questioning of civil liberties was pertinent, as the line between legitimate protest and wanton violence got trampled all around us.

In the small hours of Friday 29th April violence broke out on the streets of Bristol for the second time in a week. ‘The troubles’, as one BBC reporter referred to them, first began a week before as the opening of a new Tesco sparked the worst riots seen in Bristol since 1980.

On Thursday 21st, following a tip-off that occupants of the ‘Telepathic Heights’ squat on Cheltenham Road had been constructing petrol bombs, police moved into make an arrest.

At 9:15pm officers closed Cheltenham Road and forced entry into the building. Four men were arrested, and a police statement confirmed that a number of items were seized “including petrol bombs – which are currently being forensically examined.” One of the men subsequently pleaded guilty to possession of a petrol bomb, but not guilty to a second charge of threatening a Tesco employee with it.

Following the highly visible arrests at Telepathic Heights, hundreds of people began to congregate in the area. Within a few hours they were joined by over 160 riot officers, many brought in from Wales.

Although the gathering began peacefully, clashes with police soon erupted and spilled out into the surrounding area. Barricades of burning bins were erected; fireworks, bricks and bottles were thrown at riot officers. Local resident Alex Slocombe saw “running battles with police all over the place.”

END_OF_DOCUMENT_TOKEN_TO_BE_REPLACED

Forensics team outside Tesco the morning after riots.

Eight police and a number of civilians have been injured after riots in Stokes Croft resulted in the trashing of a new Tesco Express.

Following a tip-off that occupants of the ‘Telepathic Heights’ squat on Cheltenham Road had been constructing petrol bombs, over 160 police in riot gear descended upon the area. 15 riot vans and a police helicopter were also involved in the operation.

At 9:15pm officers closed Cheltenham Road and forced entry into the building. A police statement confirmed that a number of items were seized during the arrest “including petrol bombs – which are currently being forensically examined.”

It also stated “three people were arrested on suspicion of public order offences and another person on suspicion of threats to cause criminal damage with intent to endanger life.” Police intelligence suggested that the petrol bombs were going to be used against a new Tesco recently erected opposite the squat.

END_OF_DOCUMENT_TOKEN_TO_BE_REPLACED

Tristan Martin meets Havi Carel, the inspiring author of a book that draws from the world of philosophy to offer a new perspective on illness.

In December 2008 I was under the impression that a large proportion of my intestines weren’t going to make it through the winter. This was, to put it mildly, a fairly bleak prospect. At this point I had been diagnosed with a chronic digestive disease for over a year, and was beginning to lose interest in the standard medical script: “Your body doesn’t work? Have some drugs. The drugs don’t work? Best lose some body then…”

As my mind wandered from the path of standard treatment it had the good fortune to come across a book called Illness. The book put forward an account of illness that rang true with my own experience like nothing I had ever read. It put the patient’s highly individual and subjective experience of suffering at the centre of the picture, where of course it should be.

END_OF_DOCUMENT_TOKEN_TO_BE_REPLACED 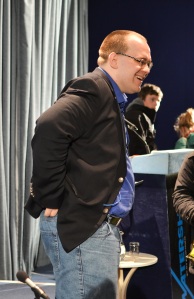 Evgeny Morozov speaking at The Watershed.

Evgeny Morozov does not believe that there was any such thing as a “Twitter Revolution” in Iran. He believes that not only was the significance of Twitter greatly inflated by the western media, but that social networks such as Facebook were used to even greater effect by the totalitarian regime in hunting down its political opponents.

A native Belarusian, Morozov is no stranger to authoritarian regimes, or the internet for that matter, having previously worked at Yahoo. One of the central theses of his book The Net Delusion is that the US underestimates the political nature of the internet. When the government aligns themselves directly with corporate enterprises such as Twitter (as they did during the 2009 protests in Iran), they make social networking a political matter. They make it known to authoritarian regimes around the world that the US seeks to facilitate these websites abroad in its quest for worldwide democracy. He calls it the ‘Google Doctrine’:

“It’s the idea that the US government stands to benefit from the fact that so much of online communications are facilitated by American companies. It’s the idea that you need to harvest the fact that America and Silicon Valley are number one in digital communications. I coined it simply because I looked at what the US state department has been doing over the last couple of years and I think they have radically underestimated the political effect, and political perception, of involving American companies in foreign policy matters.”

END_OF_DOCUMENT_TOKEN_TO_BE_REPLACED

It becomes evident that something very special can happen when musicians have something more than just music to communicate. It can be hard to pin it down, but in the case of The Middle East Peace Orchestra it has something to do with the bringing together of normally opposing forces. The synthesis of languages, sounds, and cultures so frequently at odds with one another into a unique yet entirely natural performance is a truly humbling experience.

The irony is that though the forces in the Middle East may oppose politically, in terms of music they come together effortlessly. This was demonstrated best when the orchestra played ‘Terk / Påskeblomst’: a seamless medley composed of an Arab love song, a Jewish Tango and a Danish Psalm. The effect was profound, as was the message. The fact that the three cultures came together with such harmony and ease made one truly reconsider all preconceptions of their differences. When the melodies of Christian, Jewish and Arabic songs are played back to back it really does become apparent that there is more that joins them than sets them apart.